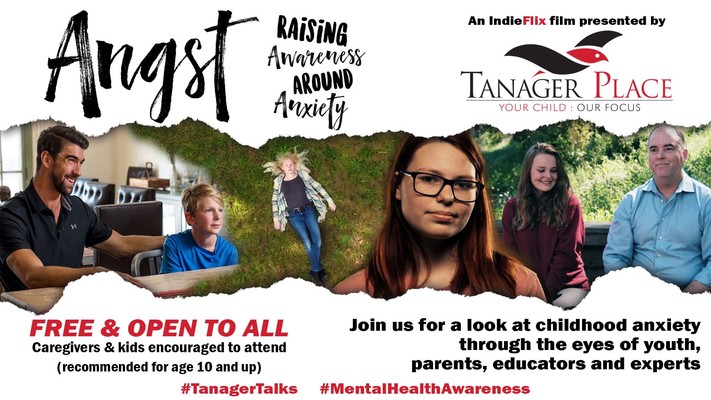 Tanager Place is holding a special screening of the IndieFlix documentary “Angst” to open up a dialogue between local families, community leaders and experts.

This event will feature a viewing of the 56-minute film, followed by optional guided community conversations led by Tanager Place experts. Although the event is free and open to all, auditorium seating is limited to 200.

Part of the beauty of this film is the openness of the children and young adults featured; for some of them, the “Angst” project marks the first time they are publicly sharing their experiences with anxiety. Our hope is that their candidness and bravery will inspire our community to do this same.

Anxiety disorders are the most common mental health challenge in the U.S., impacting 54 percent of females and 46 percent of males, with age seven being the median age of onset, according to the World Health Organization. While anxiety disorders are highly treatable, only one-third of those suffering receive treatment.

While “Angst” documents the struggles some people have with anxiety, it also reveals their hope for the future. Noah, a teenager in the film, describes it this way: “Anxiety doesn’t define me. It’s not just a curse; it also gives me strength.”

Everyone involved in the development of “Angst” has a personal experience with anxiety — from producers to interviewees.

“I welcomed the opportunity to be a part of ‘Angst’ to further the dialogue around mental health and to help people understand the impact anxiety has on our mental state and encourage people, especially kids, to ask for help,” said Michael Phelps, an Olympic swimmer who appears in the film.

Caregivers and children are encouraged to attend this event. The film is recommended for age 10 and up.