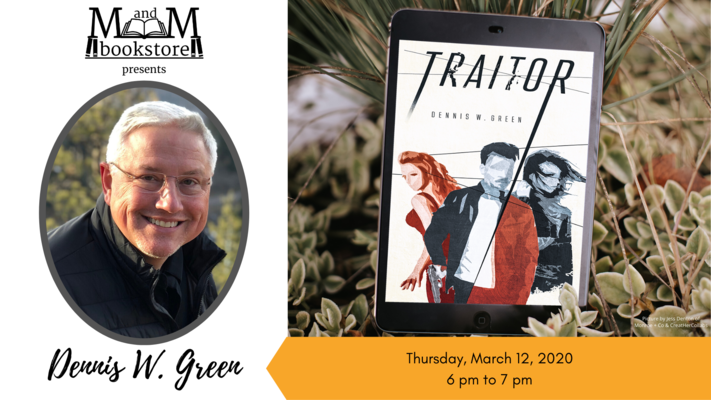 About Traitor
Stripped of his memories and exiled to a world filled with foes, Trav Becker fights his way through parallel universes against an adversary capable of anticipating his every move. But the Traveler will do whatever it takes to be reunited with the woman he loves.

Chaos sweeps through the multiverse, pushing Trav, Mary, and their loyal friends Sam and Morgan into a desperate fight for survival.

On the run and forced to seek help from the unlikeliest of allies, can Trav and his friends prevent the looming collapse of reality itself?

About Dennis W. Green
Ask someone how they know Dennis Green and you might get any one of the following: Writer, DJ, actor, administrator, sports announcer, MC, swimmer, teacher, reporter, tech geek, husband, or dad. So it’s little wonder his favorite expression is the above quote by Robert Heinlein’s spacefaring immortal, Lazarus Long.

Dennis’s first novel, Traveler, was released in 2013, and scored in the Top Ten in the 2014 Ben Franklin Independent Publishing awards. Prisoner is the second novel in the Traveler Chronicles, and Trav Becker’s saga concludes in Hunter.

Dennis’s writing has appeared in the anthology Sadistic Shorts, magazines including Grift and Romance and Beyond, as well as his own blog at denniswgreen.com. He also writes for and edits the triathlon news site heartofamericatri.com.

A popular radio personality in his native Iowa, Dennis has also worked on the stage, TV, and independent film. As a DJ, his adventures were covered by newspapers from Anchorage to Los Angeles. He is one of the Midwest’s most popular MC’s, hosting dozens of events each year.

By day, he is the general manager of Iowa’s only jazz radio station, KCCK-FM. And if it’s 5:30 am, you can probably find him in the pool, working out with the Milky Way Masters swim club.