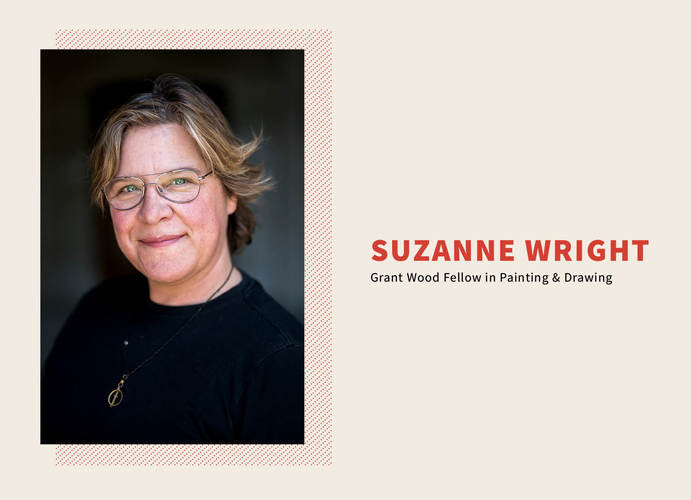 In a recent body of work, Grant Wood Fellow in Painting & Drawing Suzanne Wright researched the planning, architecture, and symbology of Washington, DC. Using Google Earth to view the capital city from an aerial perspective, she created an inverted, “feminized” version of the city’s monuments. These works open a dialogue that responds to historically masculine symbols of power, exemplified by her painting of the Washington Monument, Goddess Eye View. Wright will discuss how art, activism, and collectives have profoundly shaped her understanding of the systemic nature of discrimination and oppression, as well as the ways in which art can be a tactic of resistance and has the potential to change habitual perspectives and consciousness.

Suzanne Wright is an artist and professor living and working in Los Angeles. She earned her BFA at Cooper Union and MFA at the University of California San Diego; she also attended Skowhegan School of Painting and Sculpture. Wright’s paintings, drawings, and collages propose a contemporary feminist alchemy, forging alternative frames of reference with new perspectives that attempt to lead us to a re-vitalized kind of perception, equality, and empowerment. Her most recent solo show Feminist Alchemy was on view at Wilding Cran Gallery (Los Angeles, CA). Other recent exhibitions were at Commonwealth and Council (Los Angeles, CA) called The Rainbow Control Room and Angel’s Gate Cultural Center (San Pedro, CA). She has been included in exhibitions at Stephen Friedman Gallery (London, UK), Stefan Stux (New York, NY), Claire Oliver Gallery (New York, NY), and Monya Rowe (New York, NY). She was awarded the Kraus visiting professorship in Painting and Drawing at Carnegie Mellon and has taught at several universities in New York and Los Angeles. Her work can be seen in publications including Cock, Paper, Scissors; Feminist Landscapes; Strange Attractors; Armpit of the Mole; and Art and Queer Culture (Phaidon, 2013). Wright has been an active member of various AIDS and LGBTQ organizations, including ACT UP/New York from 1989–1998.

Individuals with disabilities are encouraged to attend all University of Iowa-sponsored events. If you are a person with a disability who requires a reasonable accommodation in order to participate in this program, please contact the SMA in advance at 319-335-1727.