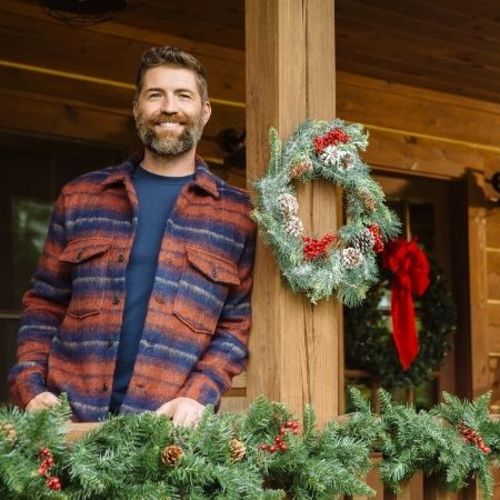 Multi-platinum-selling recording artist Josh Turner is releasing his first-ever Christmas album King Size Manger.
The holiday project features fresh interpretations of the classics and introduces four originals, three of which
were written or co-written by Turner. Plus, Turner is joined by very special guests including Turner’s wife and
four boys singing a holiday classic, a family tradition Turner wanted to feature on this special album. In support
of the album, Turner will embark on a 16-city Holiday & The Hits Tour, culminating at Nashville’s Ryman
Auditorium, where the album will come to life alongside Turner’s most notable hits.

“Making a Christmas record can be a mighty daunting task for an artist,” says Turner. “There are so many
songs to choose from and there’ve been so many versions of those songs throughout history. It can be
intimidating to know whether you’ll be able to measure up to what’s already been done and when I get to that
point, I step back and remind myself that I have to do what I hear in my heart. You may be surprised to hear
my arrangement on some of these songs that you know so well. We had a lot of fun throwing out all the
preconceived notions of what a Christmas record should sound like. In my opinion, it’s about the words and
the heart and soul of how a song sounds. You don’t need jingle bells on a song to make it a Christmas song.”

With his deep bass voice, Turner has sold more than six million records, reached 3.2 billion global streams, and
has become a favorite and unforgettable hitmaker on country radio. With timeless songs like “Long Black
Train” and “Why Don’t We Just Dance,” Turner’s five No. 1 singles include “Your Man,” of which the official
music video recently surpassed 100 million views. This comes on the heels of the release of Your Man Deluxe
Edition, celebrating 15 years of Turner’s iconic double Platinum-selling album, as well as the release of the mini
documentary “Josh Turner Your Man 15th Anniversary” (Mini Doc). The Double-Platinum-selling “Would You
Go With Me,” featured on Your Man Deluxe Edition, recently experienced a viral surge across TikTok leading to
a jump in streaming which landed the classic country tune on Spotify’s US Viral 50 along with Spotify Viral
charts in Sweden, Norway, Finland and Iceland. Posting more than 3.7M weekly streams, “Would You Go With
Me” moved inside the Top 35 on the Country streaming chart and ranked HOT on Amazon Music’s Voice Index.
A native of South Carolina, Turner has received six Inspirational Country Music Awards, and has been
nominated for two GRAMMY Awards, five CMA Awards, two ACM Awards, one CMT Award, and seven ACA
Awards. To support music and arts education, he created The Josh Turner Scholarship Fund to help students
pursue their studies in these fields.

Tickets are $65, $55 and $40 plus tax and an online/phone ticketing fee (this fee is waived when tickets are
purchased in the Gift Shop). Tickets in the ADA section are for patrons with mobility disabilities and up to three
companions. If companion seating is not available because the ADA section is sold out, RCGR will offer other
seats as close as possible to the accessible seat, if available, at the purchase price of the other section. Tickets
will go on sale to the general public at 10am on TBD in the Gift Shop, by calling 877-677-3456 or online at
http://tickets.riversidecasinoandresort.com/.

Doors open at 7pm for the 8pm show.