An Evening with Reid Forgrave 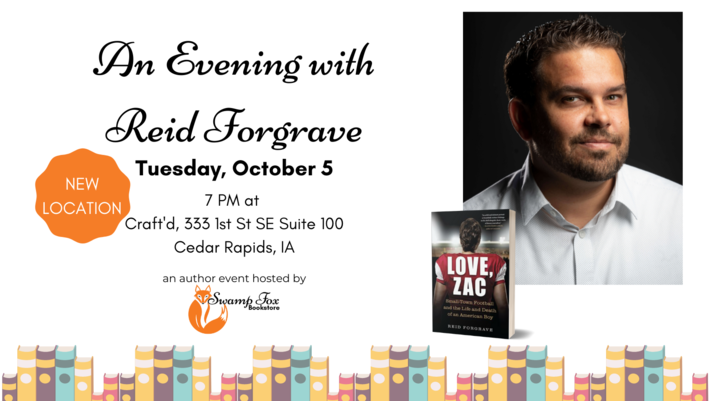 Please join us for this in-person author event with Reid Forgrave, the author of Love, Zac at 7 PM at Craft'd at 333 1st St SE Suite 100, Cedar Rapids, IA.

About Reid:
Reid Forgrave writes about sports and other topics for GQ, the New York Times Magazine, and Mother Jones, among other publications. He has covered the NFL and college football for FoxSports.com and CBS Sports, and he currently writes for the Star Tribune in Minneapolis. The article in which he first wrote about Zac Easter is included in Best American Sports Writing 2018 . A past life found him working at the Des Moines Register in Iowa, where he wrote long-form narrative journalism and covered the state’s first-in-the-nation presidential caucuses. Forgrave lives in Minneapolis with his wife and two sons. Love, Zac is his first book.

About Love, Zac:
"Love, Zac is not just a vital contribution to the national conversation about traumatic brain injury in athletes, it’s so beautifully written it belongs on the shelf alongside classic works of literary journalism.” —Jeanne Marie Laskas, New York Times bestselling author of Concussion

In December 2015, Zac Easter, a twenty-four-year-old from small-town Iowa, decided to take his own life rather than continue his losing battle against traumatic brain injuries he had sustained as a high school football player and which led him to develop chronic traumatic encephalopathy (CTE). For this deeply reported and powerfully moving true story, award-winning writer Reid Forgrave was given access to Zac’s own diaries and was able to speak with Zac’s family, friends, and coaches. He explores Zac’s tight-knit, football-obsessed Midwestern community; he interviews leading brain scientists, psychologists, and sports historians; he takes a deep dive into the triumphs and sins of the sports entertainment industry; and he shows us the fallout from the traditional notions of manhood that football instills. For parents wondering about whether to allow their kids to play football, for players, former players, and fans, for anyone concerned about concussions and sports, this eye-opening, heart-wrenching, and ultimately inspiring story may be one of the most important books they will read.