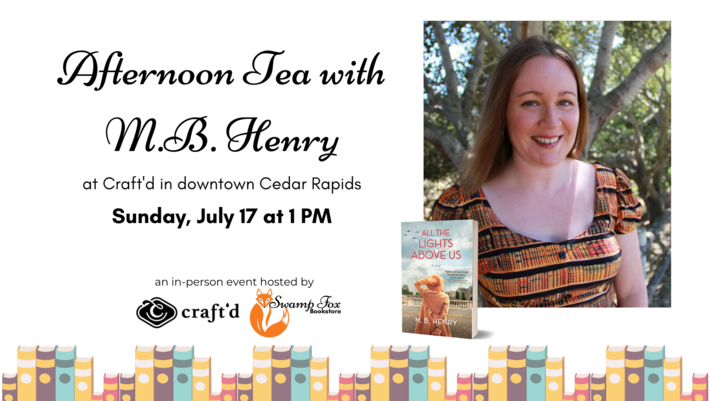 Join us for a conversation with Cedar Rapids-native author M.B. Henry on Sunday, July 17 at 1 PM.

About M.B. Henry
M.B. Henry is a lifelong student of history, especially military history, having visited battlefields and historical sites all over the world. She has a degree in Cinema and Comparative Literature, and has served as a historical consultant and researcher on films and television in Los Angeles. She lives with her husband and two cats in Indiana.

About All the Lights Above Us
Across Europe, on what history will call D-Day, five unforgettable women from all walks of life strive to survive the most terrifying night of their lives.

Told in alternating viewpoints, this unforgettable debut is perfect for fans of Kate Quinn and Pam Jenoff.

June 6, 1944. Allied forces hit the beaches of Nazi-occupied France. Among the countless lives shattered are those of five spirited women with starkly different lives. As the war reaches its tipping point, each of the women fight for the survival of themselves, their countries, and their way of life during one of the most pivotal days in history.

American expatriate Mildred, better known as Axis Sally, has a thriving career as a Nazi radio propagandist, but her conscience haunts her. Meanwhile, across the English Channel, young medical volunteer Theda is pushed to her limit as shiploads of casualties dock in Portsmouth. Closer to the front, intrepid Flora aids the French resistance, while she seeks out her vanished parents. Iron-willed Emilia has climbed the Gestapo ranks, but she is now bent on betraying them. Finally, dignified Adelaide’s faith is shaken when she is forced to quarter German soldiers.

Now, during the most perilous twenty-four hours of their lives, all five women must summon courage they never knew they had, as they confront the physical dangers of war, alongside treacherous family secrets, heartbreak, and the ability to trust themselves. For these women, their inner strength is their only hope. But is it enough? How far can one person go for the things they believe in?