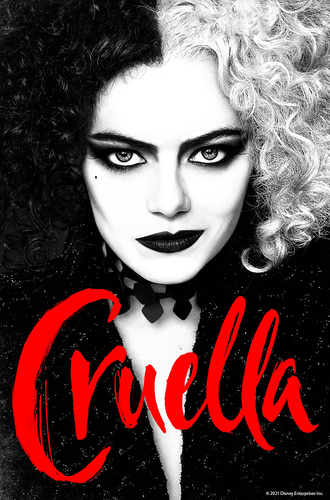 Free kids activities begin at 7:00 p.m. with the feature presentation to follow around 8:30 p.m. (dusk). Treats from Kona Ice, The Freeze, and FREE popcorn from the Shriner's Popcorn Mobile. Guests should bring lawn chairs and blankets for open lawn seating. Outside food and drink are permitted. These events are free to attend and supported in part by the Marion Hotel-Motel Grant Program.

CRUELLA: Emma Stone (LA LA LAND) stars in Disney’s CRUELLA, a live-action feature film about the rebellious early days of one of cinema’s most notorious – and notoriously fashionable – villains, the legendary Cruella de Vil. Set during the 1970s punk rock revolution in London, the story follows a clever and creative young grifter named Estella, who is determined to become a successful designer. After Estella befriends a pair of young thieves who appreciate her appetite for mischief, the three build a life for themselves on the London streets. Before long, Estella’s flair for fashion catches the eye of the Baroness von Hellman, a devastatingly chic and terrifyingly haute fashion legend, played by Emma Thompson (HOWARDS END, SENSE AND SENSIBILITY). But their relationship sets in motion a course of events and revelations that will cause Estella to embrace her wicked side and become the raucous, fashionable and revenge-bent Cruella.

Klopfenstein Amphitheater for the Performing Arts.

More Upcoming Events at Klopfenstein Amphitheater for the Performing Arts.