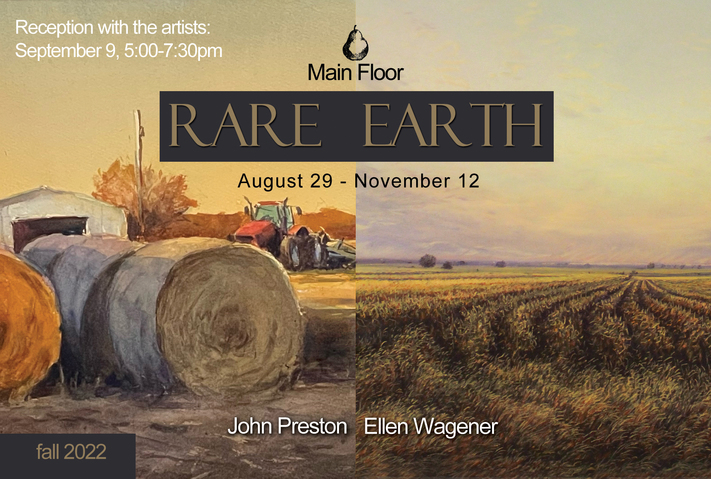 This exhibition showcases the idea of a Rare Earth, moments on our planet captured through the lens of two unique artistic voices, depicting the phenomenal beauty of the land with its companions and features— acknowledging it’s scarcity and eventual potential to be non-existent. Midwestern tableaux are discovered through farm, field and water and highlight the beauty in the ‘everyday’ or the moments we’ve possibly overlooked.

John Preston lives in Fairfield, Iowa, but grew up on the east coast. He has been painting the Midwestern landscape since 1984. Preston's paintings primarily depict the dramatic climate of the Midwest, as well as its expansive skies and rolling fields. They often represent particular locations against a backdrop of weather events from observation, memory and where necessary, imagination. “The move to watercolor reflects a desire to transition from 'finished' paintings to more of a 'complete sketch'”. Preston has exhibited nationally and is in many public and private collections, including Iowa State University, John Deere and the Chicago Federal Reserve.

Ellen Wagener was born in Maquoketa and grew up in DeWitt, Iowa. Known for her stormy clouds, burning fields, dust storms, and tornadoes moving across prairies and fields, Wagener took a new approach after her move to Arizona in 2001. Her work takes the quintessential Midwestern landscape in series and at large scale, and uses sketches, photographs and her memory to create vivid evocations in pastel of particular weather patterns and times of day. Her work has been shown nationwide and is in the collections of the Cedar Rapids Museum of Art, Iowa State University, the University of Iowa Museum of Art, the Tucson Museum of Art and the Figge Art Museum. www.gildedpeargallery.com/rare-earth